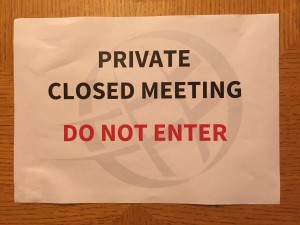 As ICANN attempts to persuade the world that it deserves to be cut loose  from the apron-strings of the United States’ government, it is perhaps appropriate to review whether it is fulfilling the requirements of its founding community, never mind going forward.

The ICANN by-laws state, in Section 1 of Bylaw 3 that:

The Corporation and its subordinate entities shall operate to t’he maximum extent feasible in an open and transparent manner and consistent with procedures designed to ensure fairness.

Now this is pretty unambiguous.  In the first few ICANN meetings this meant that anyone could participate in the work of ICANN. You just turned up, registered (at no cost), attend and speak the sessions that interested you.

The Government Advisory Committee was a special case — it was formed specifically outside of ICANN, so it is not bound by the bylaws, and membership is restricted to accredited representatives of governments and multi-national organisations.

GAC meetings were originally held entirely behind closed doors, leading to all kinds of speculations. But over the years, the GAC began to feel more and more comfortable — holding joint meetings with other constutiencies and become more transparent. And we learned that, far from devil-worship, the GAC were doing extremely useful work that quite often had a lot in common with the ccTLD community.

Unfortunately, ICANN itself seemed to be going the other way.

In recent years, the perception is that more and more meetings were being held behind closed doors. You only have to look at the proliferation of the ‘CLOSED’ tags on the schedule.

And many of these ‘closed meetings’ are unnecessarily so.

I’ve been in a number of meetings when literally none of the participant knew why it had been scheduled behind closed doors.

It’s fairly self-eviden that if there’s a meeting of the members of a particular Council, or Working Group, that the participants in that group are the only people you’d expect to be debating, but there’s no reason why the general public can’t attend, and follow the discussions.

Transparency demands it, in fact.

The only time a meeting needs to resolve to close its doors, is if, for example it is discussing staff salaries, appointments, or reviewing privileged legal advice.

It was that dangerous radical, Margaret Thatcher, who in 1962, in a Private Members Bill, brought transparency to English local government.

Given the binding nature of the by-law that requires the ‘maximum feasible’ transparency, ICANN should not be doing worse.

One thought on “ICANN Transparency”